“For us, time represents the main measure of our life in the shortest moments of everyday life, as well as for the key milestones that mark it.”

Ben & Léo is a story about the friendship between two friends who grew up together. Gastronomy is the main topic of conversation throughout the discussions. Léo's uncle inspired him to develop an interest in Japanese cuisine. Passionate about visual arts and painting, Léo discovered similarities between these worlds and the kitchen: the play of textures, the subtleties of colours... After Ben won two cooking competitions, he and Léo decided to offer their services during the evenings. The project was a success and it lead the two friends in a new professional direction when they appeared on the show Masterchef together. This was followed by solid gastronomic training for them both before they embarked on their first restaurant concept, the Café de la Fonderie in Fribourg, in 2016. It was the beginning of a great adventure for them, since two other establishments opened immediately afterwards, plus they featured in a cooking show that was broadcast in prime time on Télévision Suisse Romande. Maurice Lacroix wouldn't miss the opportunity to talk about the tasty news of talented friends! 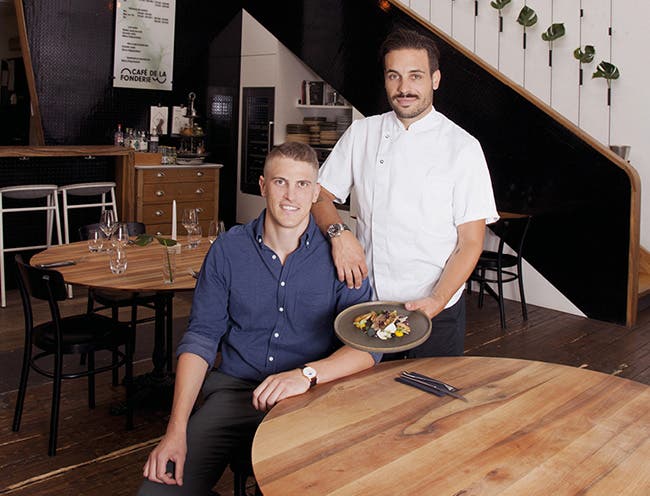 After the success of the first season of the “Bon App” show broadcast on Télévision Suisse Romande, Maurice Lacroix is proud to announce that Ben & Léo is returning to delight the taste buds of viewers from 14 September at 18:30 on RTS 1! A show in which, every week, they will make life difficult for several competitors who will attempt to make a recipe based on a photo and within a given time! The competitors, closely coached by cooking experts wearing Maurice Lacroix watches on their wrists, will be sure to share some gastronomic tips that you can try at home!

Continue to innovate, surprise and find new ideas to make gastronomy accessible to all! Ben and Leo are full of ideas and concepts that we will be sure to share with you!