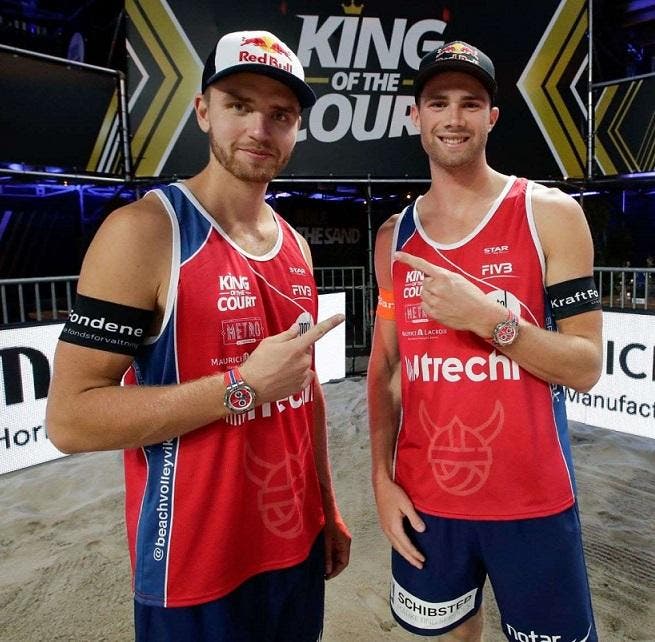 Maurice Lacroix is proud to announce that the beach volleyball world number one and friends of the Maurice Lacroix brand Anders Mol and Christian Sørum have just won the title of European Champions for the third time! During five intense days, the best European players gathered in Jurmala, Latvia, to participate in the CEV Championships: EuroBeachVolley 2020.

Nothing was ready to accompany our athletes on their way to victory since the duo had to face an unexpected climate and an adaptation of every moment. Anders and Christian had to face two very tough teams yesterday: first of all, the Italian duo Nicolai/Lupo, themselves former champions. The two Norwegians were able to gradually win the first set and finally were victorious in the second set (21:19). Then, the final was a top match between the two best teams in the world! The Beachvolley Vikings faced the Russian world number two team Oleg Stoyanovskiy and Viacheslav Krasilnikov. A tournament that did not scare Anders and Christian who did not lose a single set throughout and led the dance in two sets (21:19, 21:15). So, it’s a third consecutive victory of the EuroBeachVolley that the Viking team won yesterday. A relief for the duo who suffered like many other athletes the consequences of COVID with match cancellations as confirmed by Anders Mol: "It was a difficult year without tournaments. We are so happy that the European Volleyball Confederation organized a competition here and that we could come, play and win for a third consecutive time. I'm not sure that we realize what we have accomplished." This was the last competition of 2020 for the duo which is not really ready for a long break. In a few weeks time, they will be preparing for a major event, the 2021 Olympic Games. Maurice Lacroix is very proud of the victory of the champions and is already looking forward to accompany them in this next challenge!

Anders, Christian: Your Time Is Now!